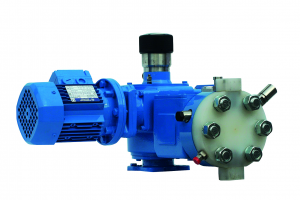 In the next installment of our “equipment series”, we will discuss diaphragm pumps. A reciprocating pump uses positive displacment to move reciprocating (back and forth) parts through the use of a piston, diaphragm, and at times a plunger. While a piston uses an up and down motion, as seen in car engines, the diaphragm pump uses a flexible band or sheath to move media. This part is referred to as the diaphragm.

Diaphragm pumps are available in single and double chamber varieties. The pump uses a crankshaft (eccentric wheel) at the top of the cylinder that is connected to the moving shaft by a rod. As the crankshaft spins, it moves the shaft back and forth to flex the diaphragm. The resulting pressure is what moves the media.

As the diaphragm moves back, it opens the inlet/suction valve. The diaphragm is then moved forward to close the inlet valve and release out of the discharge valve. The most similar process in the lay world would be a medical ventilator or breathing assistance machine.

One of the most noteworthy benefits of diaphragm pumps is their ability to eliminate contact between the media being pumped and the energy source used to operate the pump. They are self-priming, meaning they can run dry without causing damage to the pump. Diaphragm pumps also do not require the use of a sealing system and can operate without leaks. Double diaphragm pumps are also useful in applications where continuous flow is required. Applications for diaphragm pumps include:

In general, there are three types of reciprocating diaphragm pumps:

At Houston Dynamic Service, we have extensive knowledge about all kinds of pumps and reciprocating equipment. We provide high quality maintenance and repair for reciprocating diaphragm pumps and many others. To learn more, contact us to discuss how we can help keep your pumps running more efficiently, with minimal downtime.