The next installment of our Equipment Series focuses on steam turbines. A steam turbine is a type of generator that extracts energy from pressurized steam and applies it for mechanical work with the use of a rotating output shaft. It is often used as the drive in electrical generators. In fact, most of the electricity generated in the United States is done so through the use of steam turbines.

How Do Steam Turbines Work?

A turbine uses a spinning rotor powered by a gas or liquid. Rotors in steam turbines are spun by hot, gaseous steam in order to work. Blades are housed inside a sealed outer container so the energy from the steam can be maximized. The gas expands and cools as it flows past the blades in order to pass along as much of the energy it originally contains. Unlike other turbines, the steam’s flow turns the blades continually with no pushing or pulling, as well as no waiting for pistons to return.

Steam turbines turn electricity generators at incredibly high speeds and rotate much faster than either water or wind turbines. For example, a typical steam turbine found in a power plant rotates at anywhere from 1800 to 3600 rpm, while a wind turbine spins at a fraction of that and often uses a gearbox to drive it quickly enough to produce electricity. Steam turbines are also smaller and need less space than a turbine that uses a piston-cylinder-crank arrangement.

Multiple stage steam turbines- Steam turbines used in heavy industry are more complex than outlined above. Most steam turbines in use today do not have just one set of blades on the rotor, but usually have a number of different sets, called multiple stages. Each stage helps to extract a little bit more energy from the steam before it is expelled, reducing the number of turbines needed. Each stage of blades may work by either reaction or impulse, with a typical steam turbine having a mixture of both stages. They may even be mounted on the same rotor axle and turn at the same time.

Condensing steam turbines – In addition to producing energy, some steam turbines can also cool the air as it passes through the unit. Condensing turbines are often used in large power plants to generate electricity. They convert the steam to water in some parts through the use of condensers and giant cooling towers. The steam further expands while extracting the maximum energy, making the generation process more efficient. Large amounts of cold water are needed to condense the steam, which is why electricity plants are often built next to large bodies of water. Noncondensing turbines do not cool steam, and instead use the heat to make hot water in a process known as known as combined heat and power (CHP).

Overall, the maintenance requirements of steam turbines are simple and come with low costs. When operated at peak efficiency, a steam turbine can last for over 50 years.

Houston Dynamic Service Inc. focuses on steam turbine repair and rebuilds. We have been recognized as an industry leader in providing the finest turbine services available on the Gulf Coast.  Call us today to learn more about how we can service your turbines. 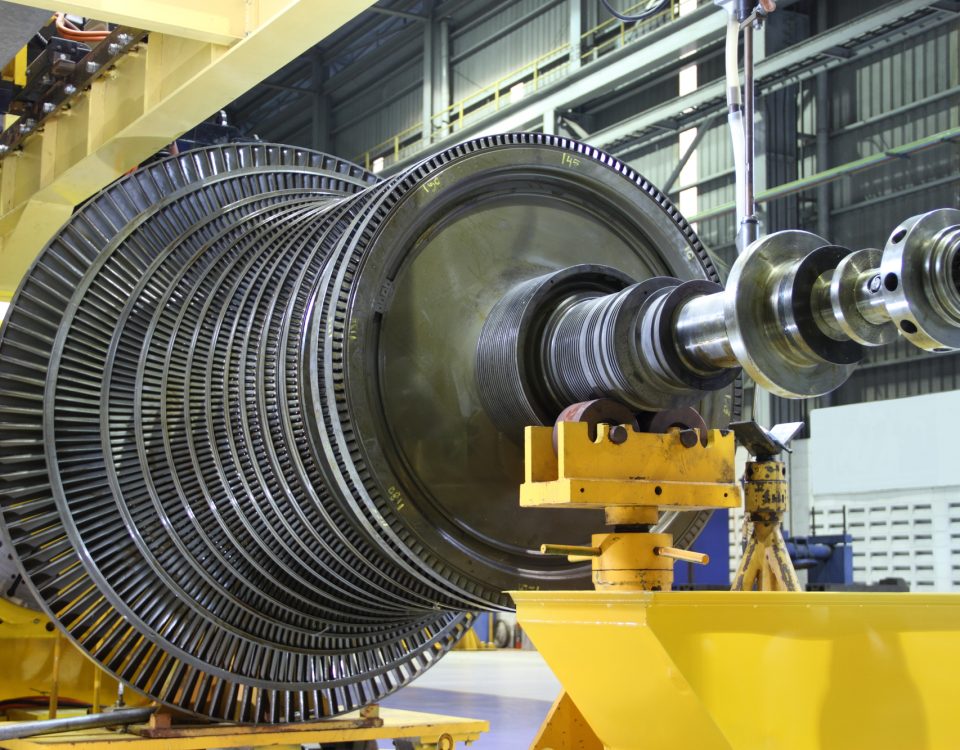 Industrial steam turbine at the workshop